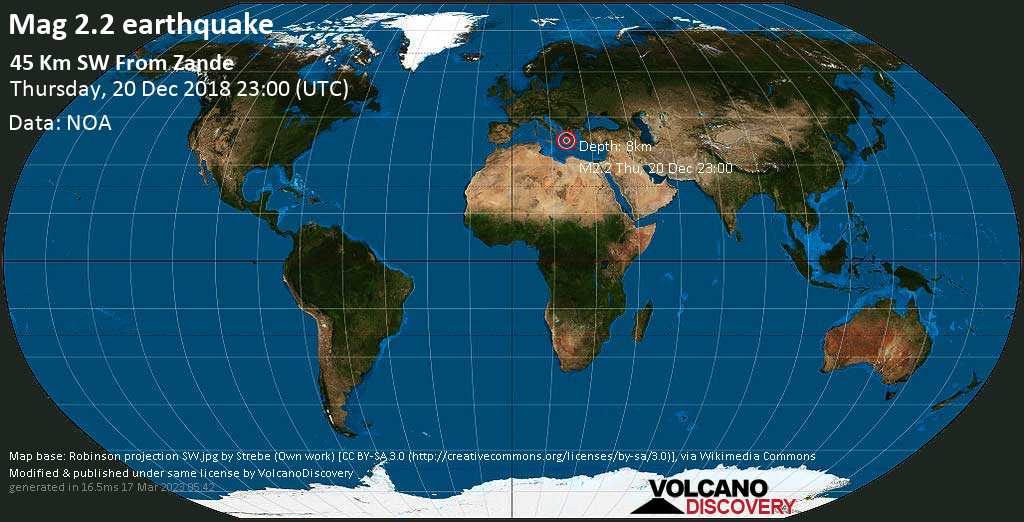 User reports estimate the perceived ground shaking intensity according to the MMI (Modified Mercalli Intensity) scale.
At magnitude 2.2, this quake was probably too small to be felt by humans, but it could be recorded instrumentally.
Contribute:
Leave a comment if you find a particular report interesting or want to add to it.
Flag as inappropriate.
Mark as helpful or interesting.
Send your own user report!
There are no user reports for this quake yet. If you felt it be the first to report it!
Try our free app!

Click here to search our database for earlier earthquakes in the same area since 1900!
Most recent quakes Top 20 quakes past 24 hrs Quakes in Greece
Try our free app!

Kelut volcano's lava dome in 2007: One of the most impressive lava dome eruptions in recent years. A new dome formed in the crater lake of Kelut volcano (East Java) in late 2007. Enjoy some unique pictures.
Earthquakes at volcanoes

Recent shallow earthquakes near volcanoes: Earthquakes often precede volcanic eruptions. Find out where the latest earthquakes in the vicinity of volcanoes have occurred.
Vote for pictures

Image pool: View user-submitted images and vote for the Photo of the Month!
Vanuatu

Vanuatu Volcano Tours: One of the most exciting volcano travel destinations in the world! On our adventurous expeditions, you will get close to active lava lakes on Ambrym Island and the spectacular fireworks of Yasur volcano on Tanna Island.
Get the ad-free version!
Why is there advertising on this site?