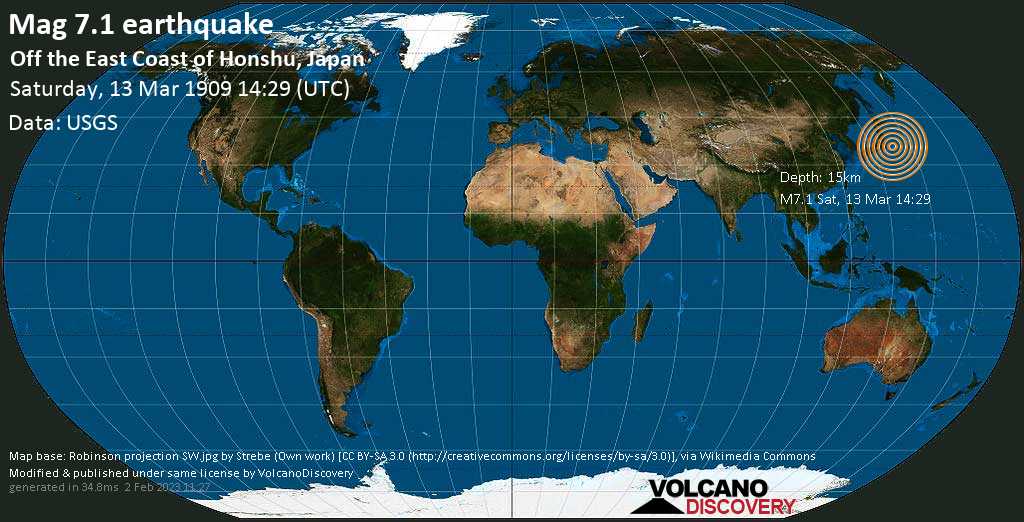 More info
Based on its magnitude, the fault that was active during the quake ruptured along a surface of approx. 1259 km2 (=486 sqare miles) as a first-order estimate. The length of the rupture zone thus was probably around 61 km (38 mi).
Aftershocks typically occur during the weeks, months or even a year following the quake at or near the same fault, at distances of up to approx. two times the length of the rupture zone.
The often broadly linear arrangement of aftershock epicenters encompasses the rupture zone of the main shock (check on the map below to verify).
Recorded aftershocks, latest first (0 quakes):
So far, no aftershocks have been registered.

Click here to search our database for earlier earthquakes in the same area since 1900!
Most recent quakes Top 20 quakes past 24 hrs Quakes in Japan
Try our free app!

Photos from Armenia: Armenia is a very photogenic country with a large variety of landscapes showing some very spectacular geology, century-old monasteries and castles, and much more.
Kamchatka
29 Aug-16 Sep 2021

Land of Colors: We still have spots free on the tours to Kamchata's volcanoes in Aug & Sep 2020! Both tours will be accompanied by a volcanologist from our team. A country full of colors and adventures is waiting for you!
Krakatoa video

Krakatoa explodes: In the afternoon of 17 Oct, a particularly violent explosion occurred at Anak Krakatau, blasting away a portion of the southern crater rim. A similar event might have been the final trigger for the catastrophic landslide that let the cone collapse and cause a devastating tsunami on 22 Dec 2018.
Eyjafjallajökull

Eyjafjallajökull volcano photos: The volcano in Iceland with the unpronounceable name... but famous in 2010 when its ash clouds drifted over Europe and forced a unprecedented large-scale airspace closure for several days, stranding millions of passengers.
Get the ad-free version!
Why is there advertising on this site?