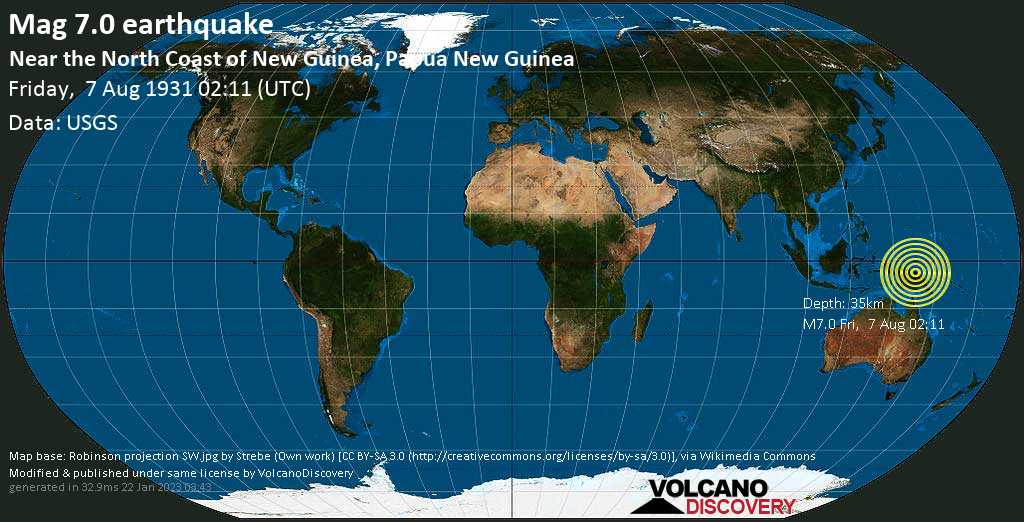 Major magnitude. 7.0 earthquake - Near the North Coast of New Guinea, Papua New Guinea, on Friday, 7 August 1931 at 02:11 (GMT)
Please check again later while we are collecting more data.
to top

Click here to search our database for earlier earthquakes in the same area since 1900!
Most recent quakes Top 20 quakes past 24 hrs Quakes in Papua New Guinea
Try our free app!

Krakatoa explodes: In the afternoon of 17 Oct, a particularly violent explosion occurred at Anak Krakatau, blasting away a portion of the southern crater rim. A similar event might have been the final trigger for the catastrophic landslide that let the cone collapse and cause a devastating tsunami on 22 Dec 2018.
Chile earthquake 1 April 2014

Great magnitude 8.2 Chile earthquake 1 April 14: Reports, maps and list of aftershocks. Did you know the seismic waves were recorded everywhere in the world?
Gorely

Gorely volcano photos: Gorely is a young and very active shield volcano in southern Kamchatka. It is one of Kamchatka's easiest volcanoes to climb and offers stunning views into vast craters and the surrounding landscape.
Get the ad-free version!
Why is there advertising on this site?