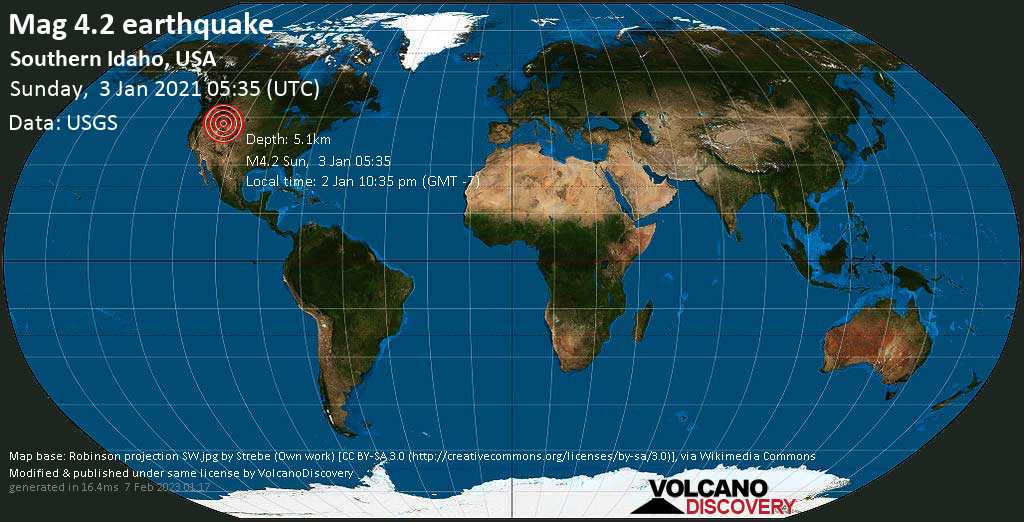 3 Jan 05:50 UTC: First to report: USGS after 15 minutes.
Update Sun, 3 Jan 2021, 05:57
Light 4.2 quake hits near Soda Springs, Caribou County, Idaho, United States
4.2 quake 2 Jan 10:35 pm (GMT -7)
Just 22 minutes ago, a 4.2-magnitude earthquake struck near Soda Springs, Caribou County, Idaho, USA. The tremor was recorded late at night on Saturday 2 January 2021 at 10:35 pm local time, at a very shallow depth of 3.2 miles below the surface.
The event was filed by the United States Geological Survey (USGS), the first seismological agency to report it.
Our monitoring service identified a second report from the European-Mediterranean Seismological Centre (EMSC) which listed the quake at magnitude 4.2 as well.
Based on the preliminary seismic data, the quake was probably felt by many people in the area of the epicenter. It should not have caused significant damage, other than objects falling from shelves, broken windows, etc.
In Georgetown (pop. 470) located 7 miles from the epicenter, the quake should have been felt as light shaking.
Weak shaking might have been felt in Soda Springs (pop. 2,900) located 10 miles from the epicenter, Georgetown (pop. 190) 14 miles away, Soda Springs (pop. 900) 14 miles away, and Paris (pop. 510) 23 miles away.
Other towns or cities near the epicenter where the quake might have been felt as very weak shaking include Preston (pop. 5,200) located 39 miles from the epicenter, Pocatello (pop. 54,400) 55 miles away, and Logan (pop. 50,400) 60 miles away.
Download the Volcanoes & Earthquakes app to get one of the fastest seismic alerts online:
Android | IOS

-6.8°C (20 F), humidity: 100%, wind: 2 m/s (3 kts) from S
Primary data source: USGS (United States Geological Survey)
Estimated released energy: 1.3 x 1011 joules (35 megawatt hours, equivalent to 30.1 tons of TNT) More info
[show map]
Show interactive Map
[smaller] [bigger]
If you felt this quake (or if you were near the epicenter), please share your experience and submit a short "I felt it" report! Other users would love to hear about it!
Also if you did NOT feel the quake although you were in the area, please report it! Your contribution is valuable also to earthquake science and earthquake hazard analysis and mitigation efforts. You can use your device location or the map to indicate where you were during the earthquake. Thank you!

Info: The more agencies report about the same quake and post similar data, the more confidence you can have in the data. It takes normally up to a few hours until earthquake parameters are calculated with near-optimum precision.
Most recent quakes Top 20 quakes past 24 hrs Quakes in the US Idaho

User reports for this quake (23)

Most recent quakes Top 20 quakes past 24 hrs Quakes in the US Idaho
Try our free app!

Android | iOS version
Get the ad-free version!
Why is there advertising on this site?
Support us - Help us upgrade our services!
We truly love working to bring you the latest volcano and earthquake data from around the world. Maintaining our website and our free apps does require, however, considerable time and resources.
We need financing to increase hard- and software capacity as well as support our editor team. We're aiming to achieve uninterrupted service wherever an earthquake or volcano eruption unfolds, and your donations can make it happen! Every donation will be highly appreciated. If you find the information useful and would like to support our team in integrating further features, write great content, and in upgrading our soft- and hardware, please make a donation (PayPal or Online credit card payment).

Planned features:Thanks to your past donations, these features have been added recently:
Download and Upgrade the Volcanoes & Earthquakes app to get one of the fastest seismic and volcano alerts online:
Android | IOS
Thank you!
Copyrights: VolcanoDiscovery and other sources as noted.
Use of material: Most texts and images, in particular photographs, on this website are protected by copyright. Further reproduction and use of without authorization is usually not consented. If you are not sure or need licensing rights for photographs, for example for publications and commercial use, please contact us.
Home | Travel | Destinations | Volcanoes | Photos | Earthquakes | About | Glossary | News | Contact | Privacy | About us || Français | Deutsch | Español | Italiano
Follow us: