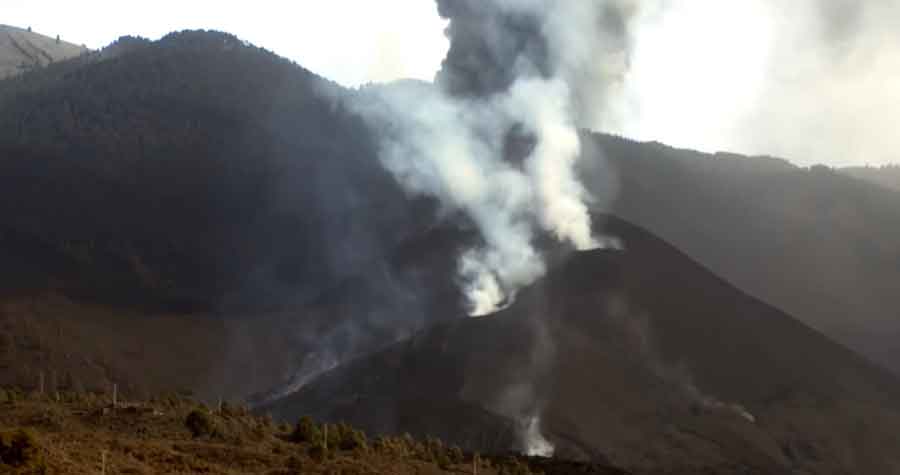 Activity at the vent of the eruption on La Palma this afternoon (image: Canarias TV live stream)

Current seismic signal LP01 station (image: IGN)
The eruption continues with no significant changes. At the vent, a lava flow is being erupted and intense ash emissions create an eruption column rising to approx. 4000 m.
Although the activity has been much less noisy recently, the continuous gas and ash emissions, often in combination with little wind has been causing lots of ash fall and poor air quality in the Ariadne Valley, which is an increasing problem.
The lava flows have advanced a bit along the active northern fronts, but the northwestern flow has not yet created a new sea entry (although it might occur soon).
Tremor remains at similar levels as during the past weeks, even a bit above average.
Earthquakes continue as well at similar numbers as before, in the same areas - mostly in 10-15 km depth under the center of Cumbre Vieja, and few, but often stronger ones at 35-40 km depth. IGN recorded a total of 101 quakes during a 24 hour interval, including 7 felt ones, with the strongest being a magnitude 4.6 event at 12:57 a.m. early today.
Deformation is showing a weak trend of deflation, suggesting that the magma reservoir is slowly emptying. 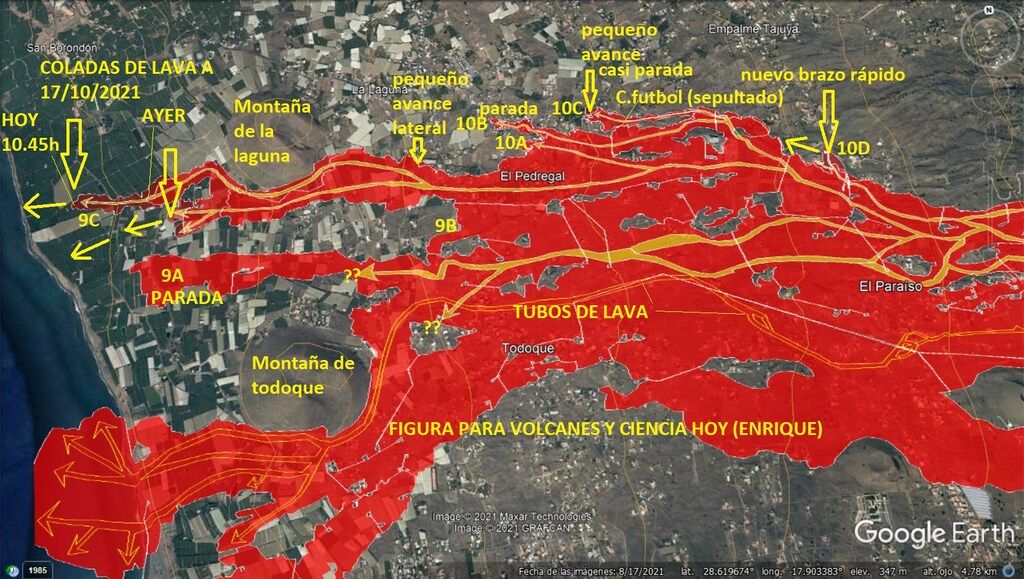 Latest map of lava flows and the tube system at La Palma as of Sun 17, 2021, afternoon (image: VolcanesyCienciaHoy / facebook)
Enrique / VolcanesyCienciaHoy on facebook posted a very informative new lava flow map shown below.
Lava flow (or lobe) 9C has developed 3 arms. One of them, the one located more to the north, traveled about 450 m since yesterday's position and is likely going to reach the ocean in the course of this evening, destroying on its way banana fields. The flow destroyed the SPAR supermarket in La Laguna, but fortunately only few other structures.
As to the northern flow (10A and 10B), the flow fronts appear to have stopped. The flow arm 10C, which advanced a lot yesterday has almost stopped, advancing only a few tens of meters.
New lava outbreaks have appeared in the highest part of the flow field; the most energetic of which is shown as 10D arm. 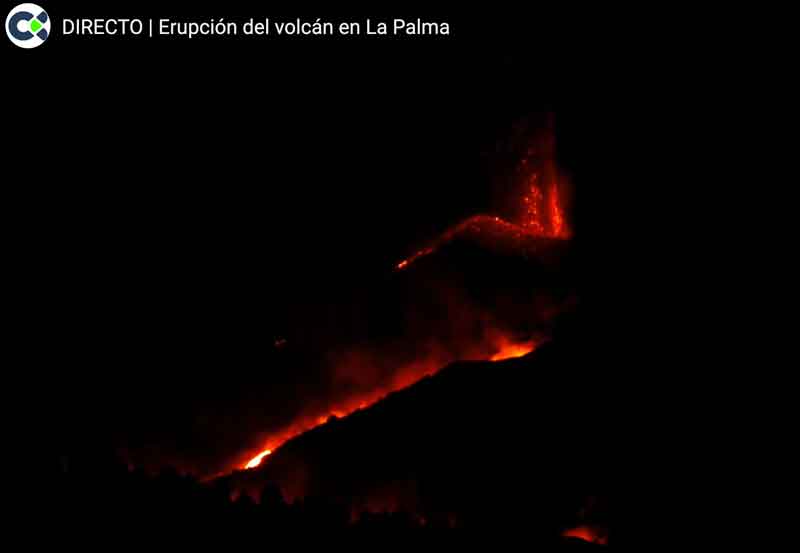 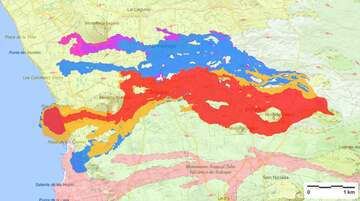 Current seismic signal LP01 station (image: IGN)
Activity has been a bit lower today compared to previous days. Volcanic tremor remains at moderate levels with pulses of intensification now and then, but is lower than during the past days, suggesting that lava effusion also decreased a bit.
At the vents, a lava flow continued to be active and explosions at the upper vents produce pulsating fountains with strong ash emissions. The ash plume has been rising nearly vertically today due to the absence of winds, reaching an altitude of approx. 4000 m.
The advance of the lava flows has slowed somewhat. The northern flow front, west of Montagna La Laguna and directed westwards, has been advancing at rates of approx. 15 m per hour and is now close to or already at the coastal cliff.
Deformation shows a trend of deflation at the station closest to the eruptive center, suggesting that the output of lava now exceeds supply of it from depth. This could be seen as a first sign the eruption likely has passed its peak.

Así está la erupción a las 11,45 hora canaria / There is the eruption at 11,45 Canarian time pic.twitter.com/wUOjhXzRas

Earthquake activity remains significant, although also decreased a bit compared to previous days. During the past 24 hours, there was 1 quake of magnitude 4.0, 24 quakes between 3.0 and 4.0, and 51 quakes between 2.0 and 3.0. 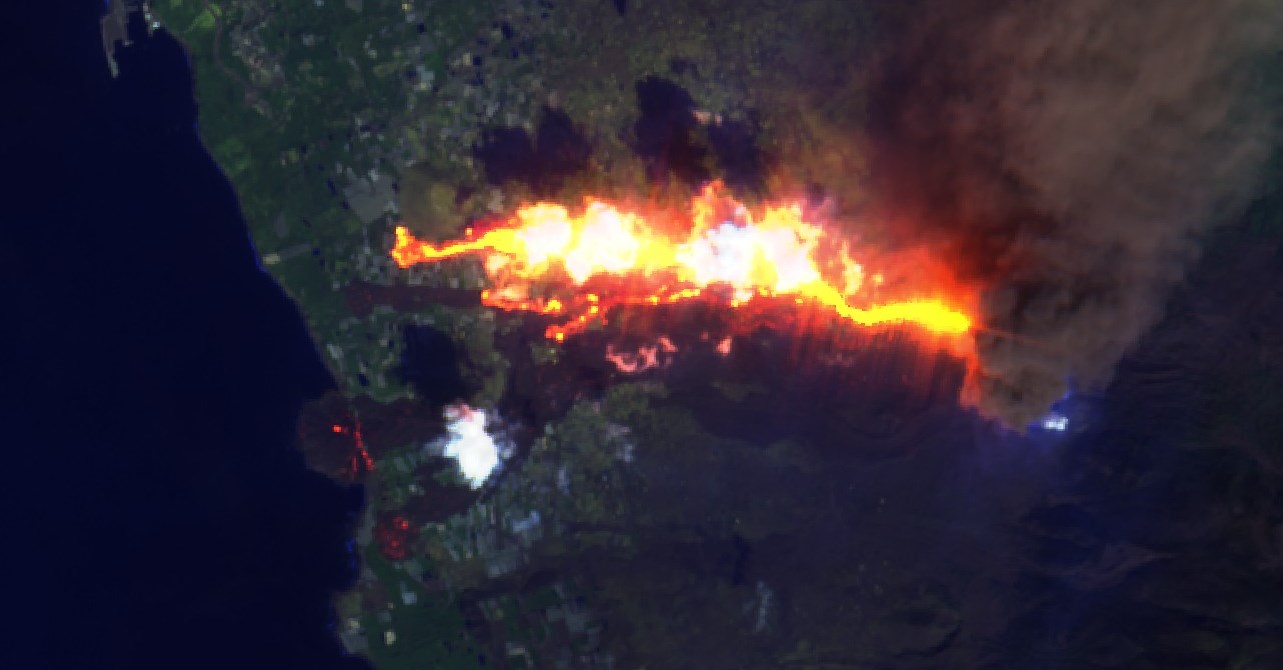 Sentinel satellite image of lava flows as of 15 Oct 2021 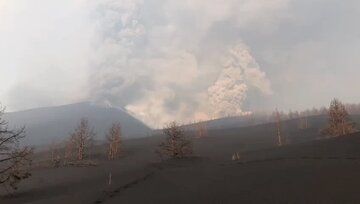 Activity at new vent that opened or was reactivated yesterday afternoon southeast of the cone (image: INVOLCAN / Twitter) 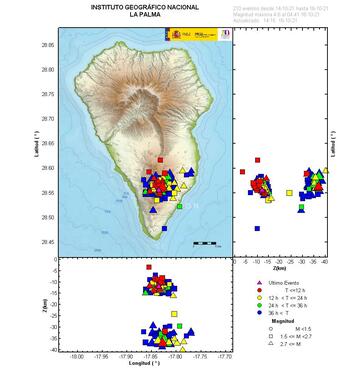 Earthquakes under La Palma during the past 3 days (image: IGN) 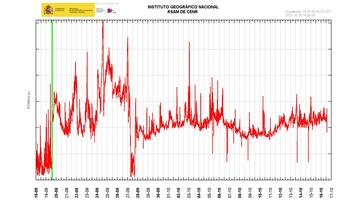 Current seismic signal LP01 station (image: IGN)
The eruption continues with high lava effusion rates and strong ash emissions. Lava flows continue to advance at various fronts, in particular along the northern margin of the existing flow field, continuing to threaten La Laguna. According to the latest figure, lava has so far covered 742 hectares, damaged or destroyed 1,058 building, out of which 854 were residential.
Volcanic tremor, as an indicator of magma flux, remains high and has increased a bit compared to the previous days.

Most notably, lava advance has been occurring at 3 lava flow fronts. Among these, two active fronts remain south of La Laguna, which are likely to merge and could soon reach the sea as well. One of these lava flows surpassed the mountain of La Laguna yesterday and was reported to be fed by a channel where lava flows at speed of 1300 m per hour:

A third active front that advanced towards the northwest is of particular concern. Yesterday, it had reached the El Cumplido road and slowly continued its path. Today, it continued moving through the industrial center of Tajuya and approaching the center of La Laguna, but it is hoped that topography will divert it more towards the west before reaching La Laguna's center.

Continued ash emissions, airport affected
At the vent, activity remains dominated by lava effusion with less explosions than before, although it still generates a plume rising to 4000 m altitude. Today, some ash fall reached the airport, affecting operations and the airspace between La Palma, La Gomera and the North of Tenerife.

New vent southeast of cone
Yesterday, a new vent was reported to have appeared 300-300 m southeast of the main cone yesterday afternoon; according to new information, it was apparently an older vent active early on in the eruption that was reactivated, but decreased its activity again toda. It mainly emitted gas and ash, but apparently no or little lava flows.

Gas emissions, seismic activity, ground deformation
Sulfur dioxide emissions were measured at 2882 tons per day, considerably lower than on previous days.
On the other hand, seismic activity increased again in the number and average size of quakes, clustered in two areas (10-15 km as well as 35-40 km below the volcano). The strongest-so-far quake was a widely felt magnitude 4.5 event early this morning.
As to the quakes in the shallower group, a weak trend is becoming visible in that they tend to migrate to the northwest, i.e. closer to the current eruptive centers.
Ground inflation observed in the past days decreased again to the levels observed since the start of the eruption. 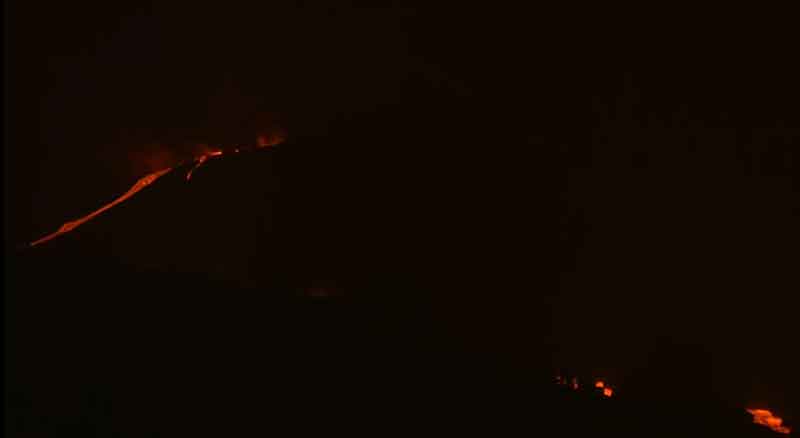 Lava flows from the cone at La Palma this morning (image: live stream)
Explosive activity, the lava fountaining in particular, has decreased a lot and often is absent. The eruption has "switched" to be dominantly effusive; this could mean that the magma richest in gas, usually at the top of a magma batch in the reservoir and erupted first, has been exhausted by now.

First visit to our site? If you havn't done it yet, download the Volcanoes & Earthquakes app to get one of the fastest volcano news online:
Android | IOS 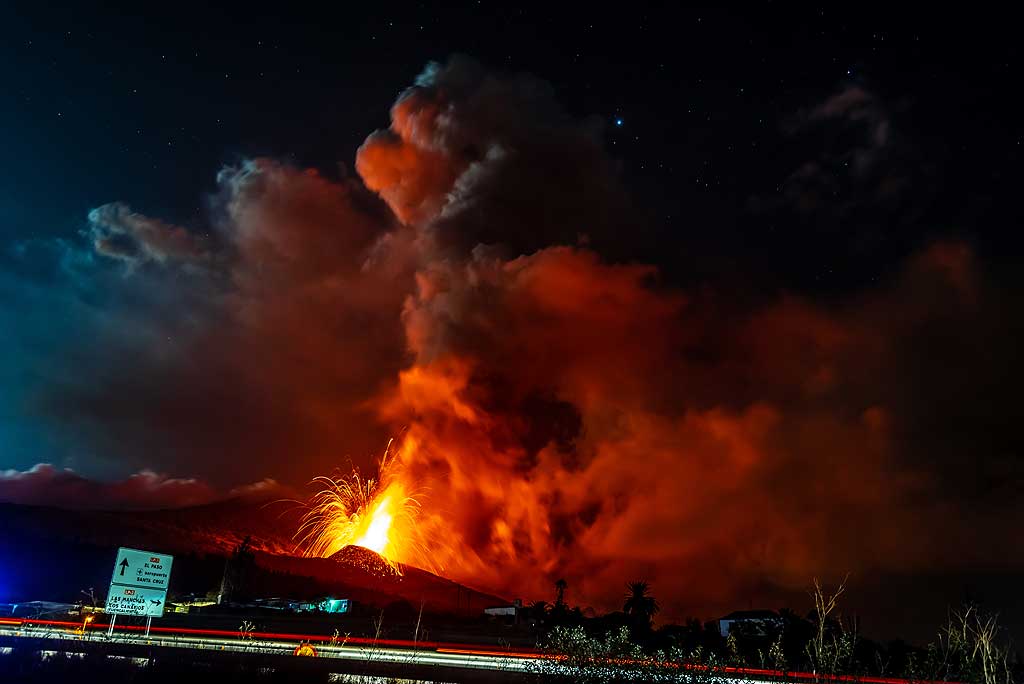 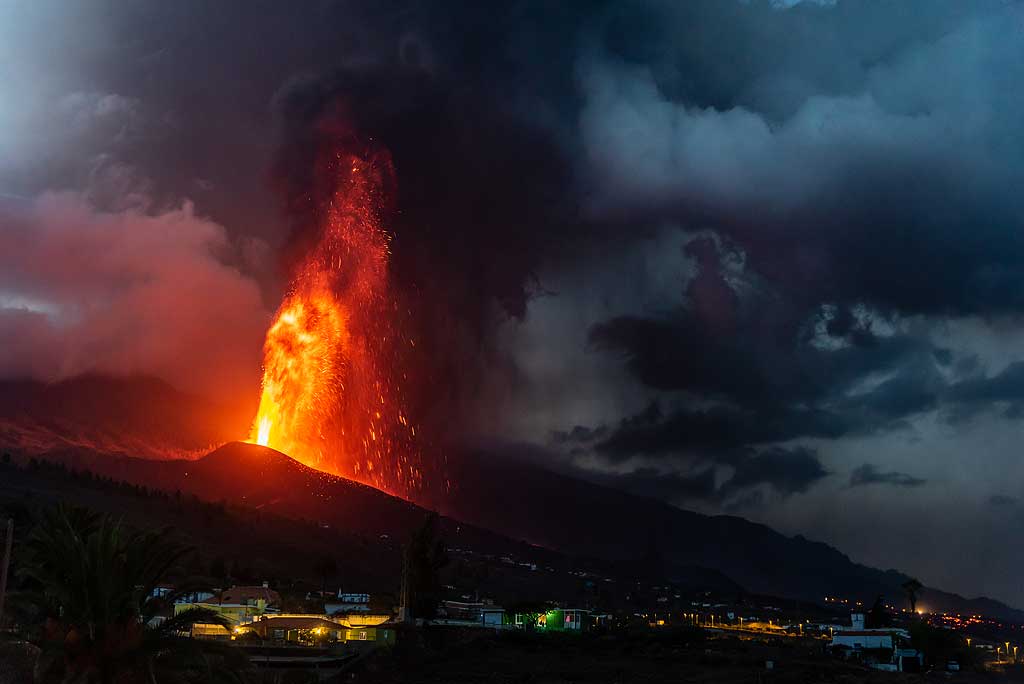 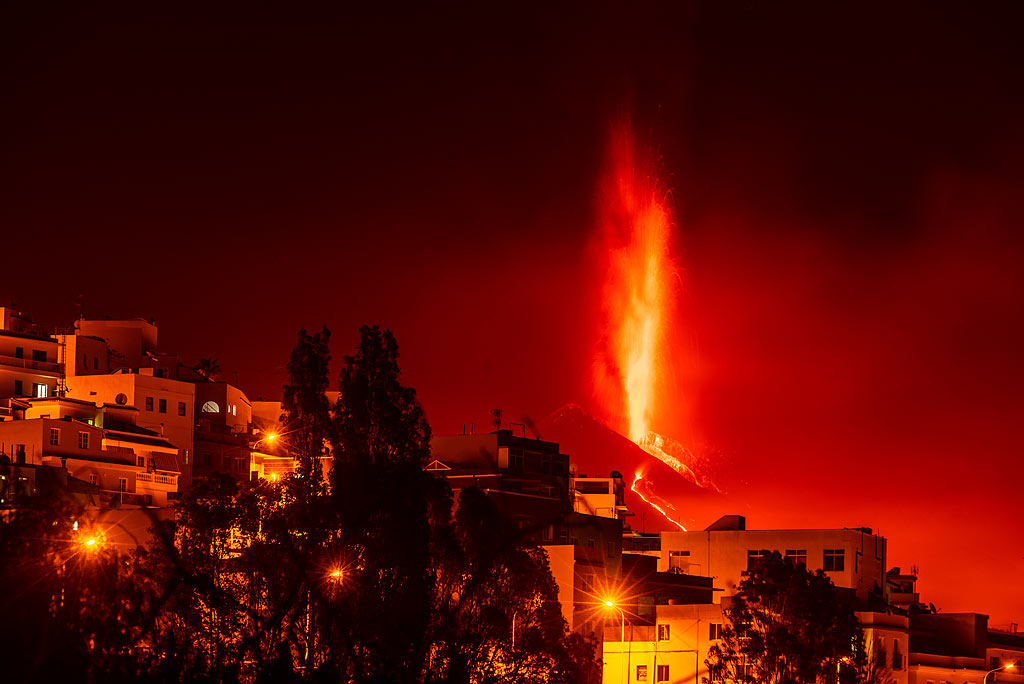 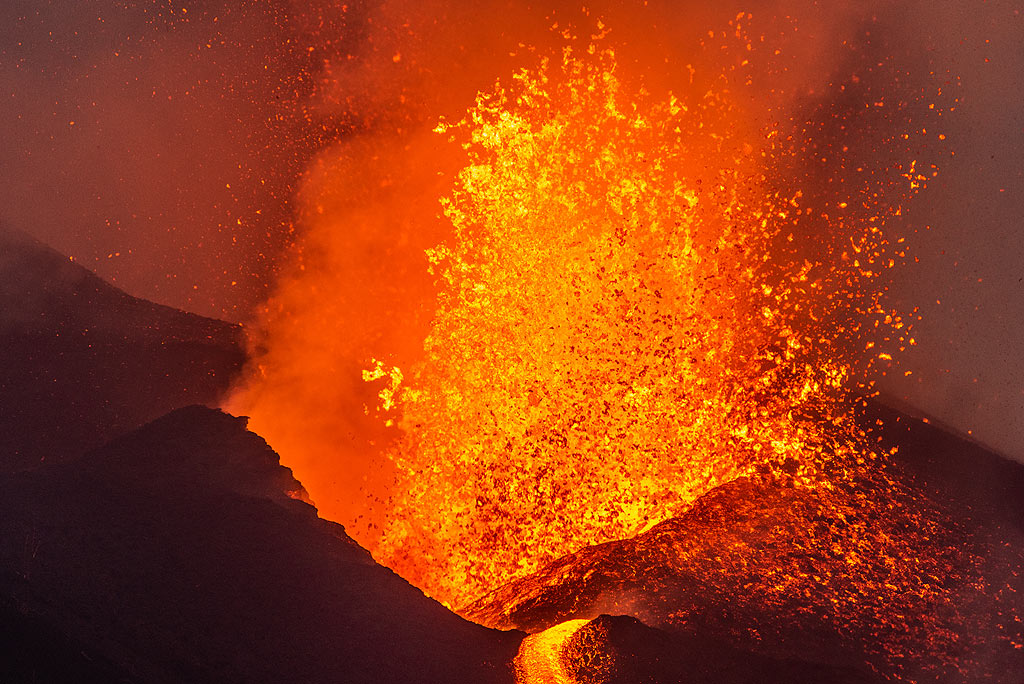 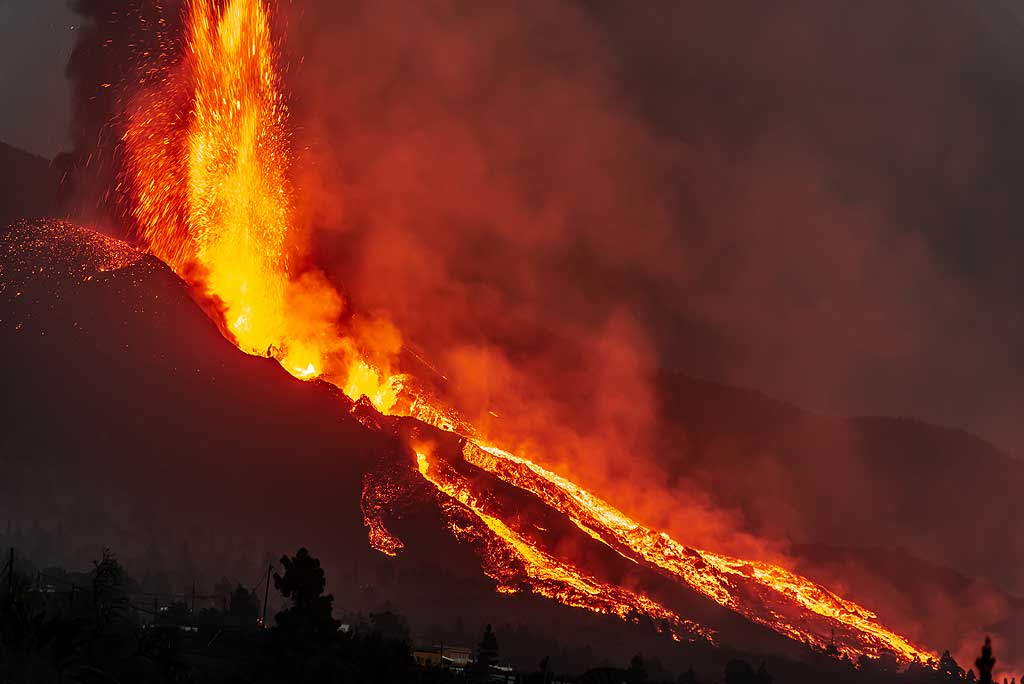 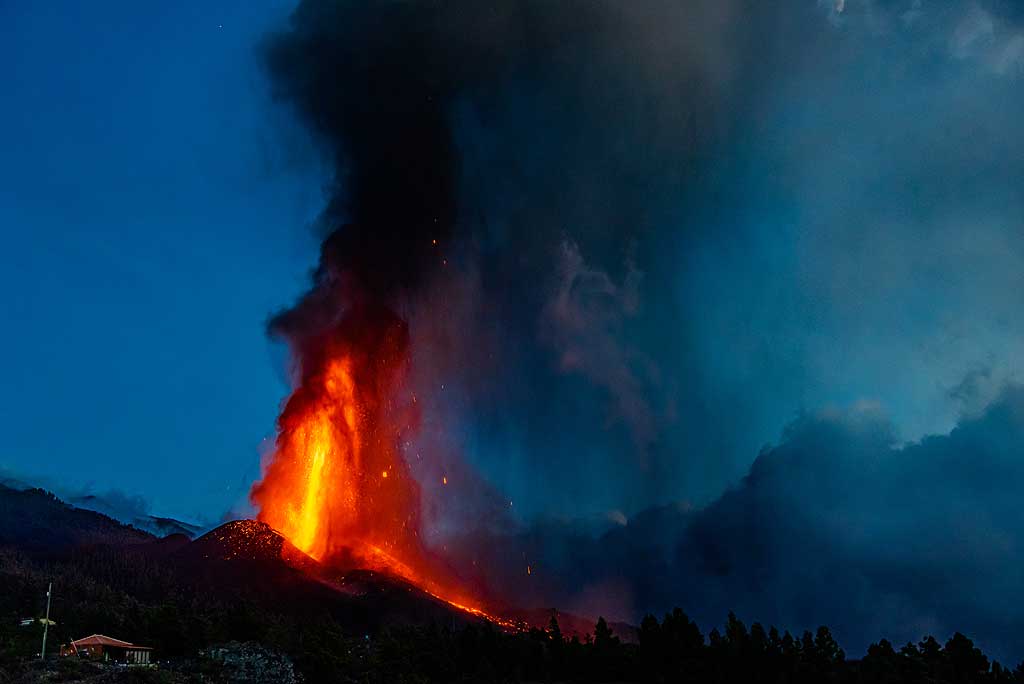 Kamchatka photos
A growing list of photo galleries taking during our expeditions in this fantastic part of the world, full of volcanoes, unspoiled nature and colors.
Molucca
3-19 May 2020

Volcanoes & Spices
This 17-days adventurous expedition is one of our most exciting volcano tours! Visit Halmahera, North Sulawesi and the Sangihe Islands with some of Indonesia's most active volcanoes, including Dukono, Ibu, Lokon, Soputan and Karangetang.
Smoke rings

Blue flames of burning sulfur
Ijen volcano in East Java has one of the most impressive sulfur deposits on earth. They are so hot that the sulfur often ignites - a mysterious display at night caught on camera.
Get the ad-free version!
Why is there advertising on this site?
Support us - Help us upgrade our services!
We truly love working to bring you the latest volcano and earthquake data from around the world. Maintaining our website and our free apps does require, however, considerable time and resources.
We need financing to increase hard- and software capacity as well as support our editor team. We're aiming to achieve uninterrupted service wherever an earthquake or volcano eruption unfolds, and your donations can make it happen! Every donation will be highly appreciated. If you find the information useful and would like to support our team in integrating further features, write great content, and in upgrading our soft- and hardware, please make a donation (PayPal or Online credit card payment).

Planned features:Thanks to your past donations, these features have been added recently:
Download and Upgrade the Volcanoes & Earthquakes app to get one of the fastest seismic and volcano alerts online:
Android | IOS
Thank you!
Copyrights: VolcanoDiscovery and other sources as noted.
Use of material: Most texts and images, in particular photographs, on this website are protected by copyright. Further reproduction and use of without authorization is usually not consented. If you are not sure or need licensing rights for photographs, for example for publications and commercial use, please contact us.
Home | Travel | Destinations | Volcanoes | Photos | Earthquakes | About | Glossary | News | Contact | Privacy - change consent | Imprint || FR | DE
Follow us: